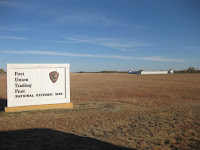 Spent the afternoon at Ft Union, ND...it is a fully restored Trading Post from the early 1800's (I think). Anyway, it was a nice stroll...it was/is a combined project between MT & ND. The parking lot is in MT, you cross into ND walking up to the fort!  I thought it was funny but the ranger said that working together they were able to get the funds to do the restoration. 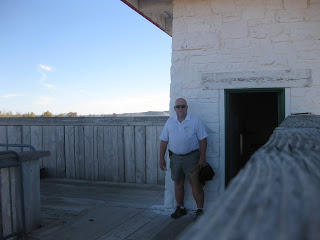 There was a nice little museum in the main house. There were several short videos about the post, the company that ran it, the indians that traded there and how life was in the day of the fur traders.  They made a killing between what the furs "cost" them and what they were able to sell them for back east! 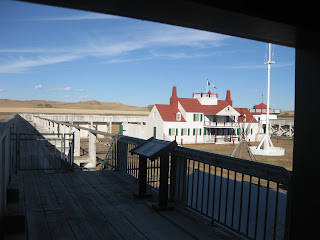 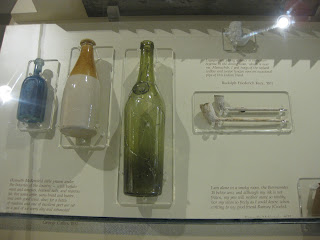 The "main house" was quite awesome. The ranger was telling me that during this time, the average family income in the states was $50. The workers here started at $100-200. Trackers/trappers $300-400.  Blacksmith/craftsman $500-600.  If you were an accountant type....$700/yr. The guy running it, at the least several thousand/yr plus a commission on all sales.


As I was saying, the museum there was actually quite interesting. There was a pretty nice collection of era items, and expecially the "peace medals". That was quite interesting. I don't remember hearing about these things, and they were quite nice. In fact, being as big as they were, the amount of gold/silver in them would make them valuable today on any standard!! 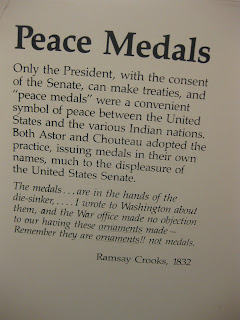 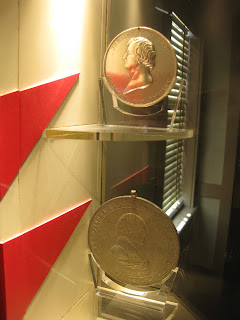 While looking around, the ranger was telling another visitor that when one of the head guys was leaving, he sounded like an arrogant idiot, he had all his stuff loaded on a bunch of wagons and parked out front of the post. He then proceeded to burn them so that the company could not have any of it!! They have never really done any excavation for any of the metal stuff left, but hopefully one of these days they will be able to get some of it found. 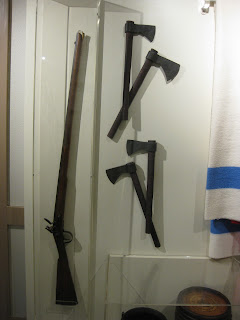 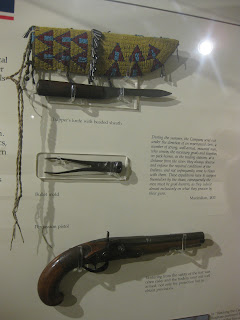 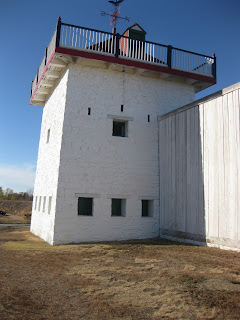 I had to show you this, they didn't think a lot about the angle of attack for attackers! If you didn't get right in front of the gun, you had a pretty good chance of not getting hit at all by it!!  LOL  But the Yellowstone River was only about 40-50 yards in front of the gates, and that was also where the landing wharf was. Over the decades, the river has rerouted to the south, so it is now about 3/4 of a mile in front of the fort. But the drop off of the original back is still there. 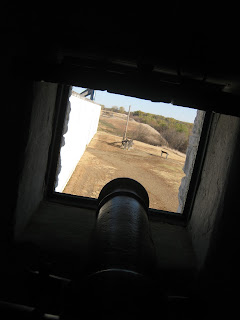 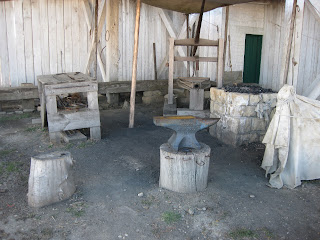 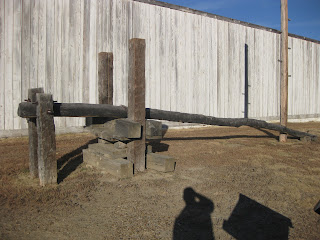 The fort was self supporting, so they did it all here. The blacksmith was pretty well outfitted, and the "fur press" was outside the gate. They would take the furs traded for, place them under the "press", the start bringing down the pole to pack them into 100 pound bundles for shipment back to the east. Kind of neat operation. 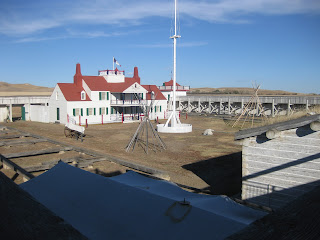