Hey folks....if you're planning on coming up to the SNRA for the weekend,  Sunny & Red Fish are staying pretty well full. I might have a couple of sites open in the morning, but I'm full by afternoon, if it takes that long!

We're having some smoke in the air from the Idaho City & Boise fires, & we're under a "High Fire Chance" warning, it's been windy & very dry.

So if you're coming out for the weekend, be prepared to have to hunt for a site!

A strange start to the season! 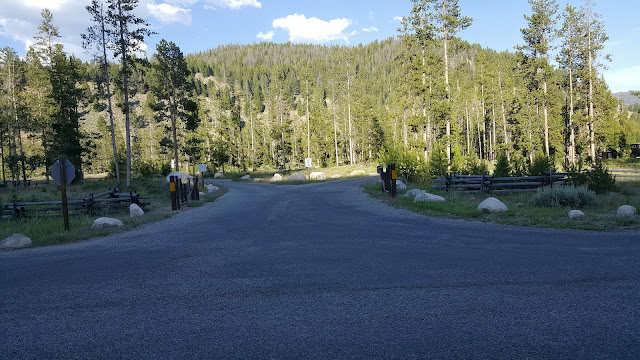 It has been a really different season so far this year...in fact...Sunny is probably behind last year's numbers by close to 50%! Part of the problem is the weather...today has seen some sun, but it has mainly rained with two times of sleet/ice falling on us!  The low tonight is supposed to be in the low 30's and that will be the low for the next several nights.  And we have some fresh snow on the peaks and it rained most of the day a couple of days ago. 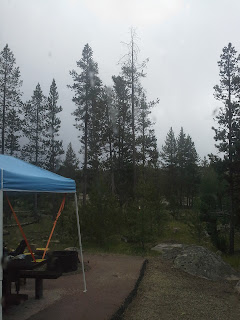 It is also a fact that gas is $1.20+ a gallon cheaper at this time than it was last year, and when I ask my "one nighters" where they are headed, they are usually headed a fairly long distance away....taking trips that they have put off for several years due to the price of fuel.

But the 4th of July weekend was a good week and weekend, my headcount for the week totaled about 1,007 folks...so it was a full and busy week/weekend.  But it has since fairly well died down. So overall I am enjoying the slower pace and just almost acting like a camper!  :-)

The other evening I was sitting in the golf cart, just relaxing, and got the feeling that I was being watched! So as I looked around the site, I realized that there were a pair of eyes peeking at me thru the young trees on the front side of my site....and guess what I saw....... 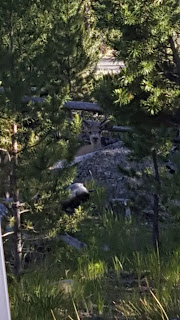 this little guy was standing there looking at me! Nice looking 6 pointer (if you're in Idaho, he was a 3-by-3).  He then did about 4 turns in place and bedded down for a nap! 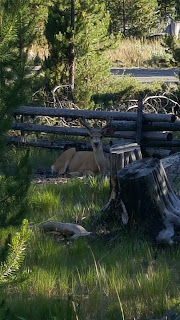 A couple of my campers have seen 3 elk come thru the campground late in the evening...those I have not seen yet....but I keep watching out for them!

This coming Wednesday I am headed for Challis, ID to have the valve cover gasket replaced on Sidekick. Hopefully there is a shop in Challis where I can get a "spa day" for Abbie (she really needs one!!), and I am going to go look at some old travel trailers. I'm considering moving "down" to a small trailer that Sidekick would be able to haul. It will help my SS budget go a lot further! And it would let me get into a lot of places that you just have a hard time getting a class C into it.

So things just keep sliding along here in Idaho..I am enjoying the cool weather...I apologize to all of you in TX, AL...even MI....but I can also truthfully say....I am not missing the heat!!!!!

Take care and I will try my best to update a little more often!! 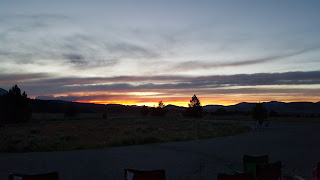