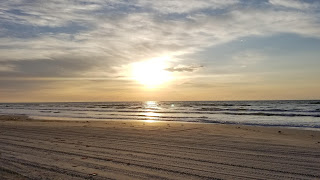 (Apparently this never posted from Padre Island!)
All settled in on the beach. About a mile from the end of the pavement of the road coming down to beach. It was fairly busy this weekend...Cinco de Mayo weekend.

I have figured out that my favorite time on the beach is 1900-0800!  If I'm going to be hot, I would really rather be in a dry climate...all this moisture is really tough for me! 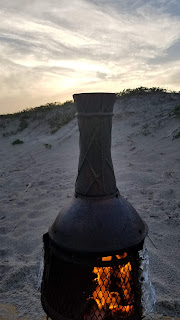 I've had a couple of fires...with the predominate wind coming onshore it makes it so nice not to fill Europa up with smoke!! Also cooked a potato & it came out great! Does take about twice as long as when you throw it into the coals...but it came out sooo good! 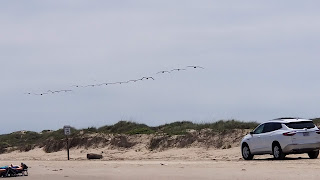 Just had to include a pic of one of the "pelican patrols"! This is one of the largest patrols that I've seen!  They are just really cool birds.I think I saw a Caracara this morning, tried to get a pic of it, but it stayed on the inland side of the 2nd sand dune & never got close enough to get a good shot at it. Shot as with a camera!!